It is important to recognise that women —including migrant and diaspora women— are powerful agents and leaders in their families and communities at both a national and international level. Just a few examples of the many ways in which they lead and inspire others through positive action include providing resources for their families, facilitating migration, adapting to displacement and promoting diaspora engagement. Utilising their contributions and promoting the participation of all genders is key to ensuring inclusive programming and the development of solutions built also on the capabilities, knowledge and perspectives of women.
IOM Gender Focal Points work to promote gender-sensitive programming across IOM's projects, programmes and activities.

"Migrant women are powerhouses of inspirations in their communities, societies and countries of origin."

From helping newly arrived refugees to integrate in their new communities to working in the front-line of the NHS, to promoting climate action, diaspora women are bridging cultures, exchanging experiences and building fairer and more inclusive societies. Diaspora diverse voices are catalysts for sustainable development in terms of both their cultural and economic contributions.

Jebi Rahman has been delivering international and sustainable development programmes for a decade and a half, covering a range of issues including poverty alleviation, quality education, gender equality and climate change, within large international organisations, including BRAC. Jebi has gained in-depth country experience working in her home country Bangladesh, as well as India, Japan, South Africa, South Sudan, and overseeing projects in Latin America. She holds Masters degrees from Glasgow and Oxford University. In 2010, she cycled from Sylhet to Cox’s Bazar in Bangladesh to highlight the impacts of climate change.

"Women can and do play a critical role in responding to climate change due to their local knowledge and leadership in sustainable resource management and practices at the household and community level." 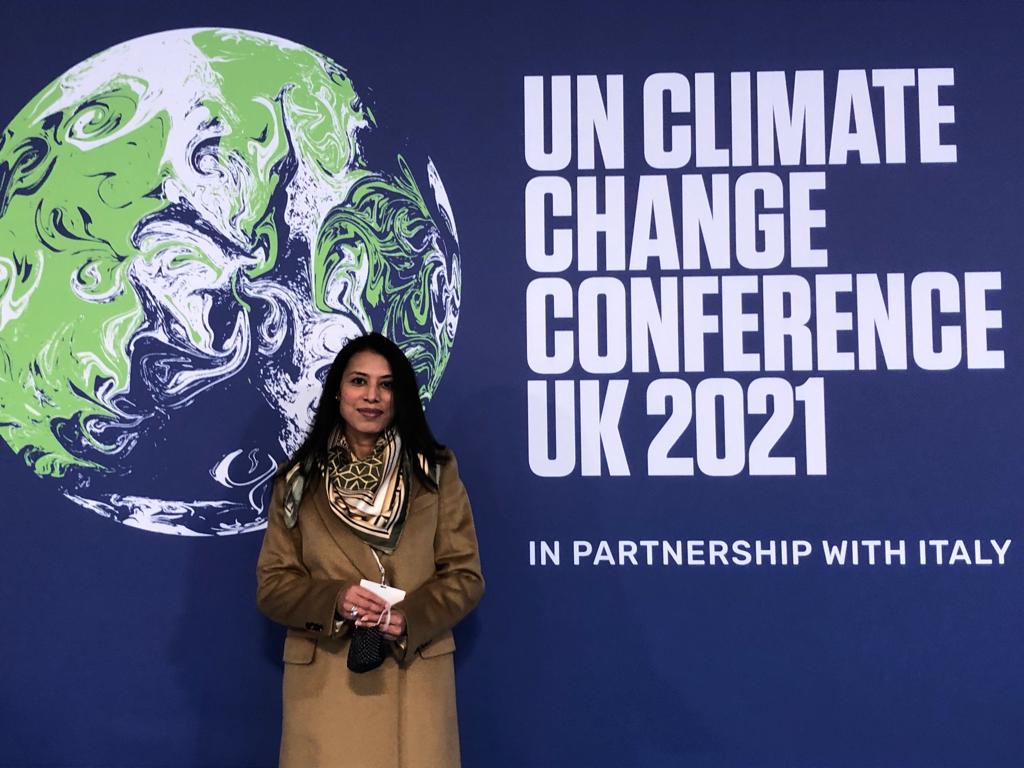 Q: Can you tell us about your work and how you promote diaspora engagement?

A: Hello, Happy International Women’s Day! Thank you to IOM for this opportunity. I’ve been working in international and sustainable development for almost 15 years, covering issues such as poverty alleviation, quality education, gender equality and climate change.

I currently head up a diverse team at an international non-profit dedicated to halving global emissions within this decade. We do this by working with leaders and decision makers from business and government, because they shape the market frameworks that can help the world achieve net zero emissions by 2050.

We are also committed to equity, diversity and inclusion, and thinking about how to incorporate climate justice into our operational and programmatic work. As a British Bangladeshi, this is extremely important to me. Bangladesh is one of the most climate vulnerable countries in the world.

Early on in my career, I worked with British Bangladeshi professionals who were keen to use the knowledge, skills and experience they had gained in the UK to volunteer in Bangladesh, “giving back” so to speak, to disadvantaged communities “back home”.

More recently, in the run up to COP26 in Glasgow, and to celebrate the 50th anniversary of Bangladesh, I connected with members of the Bangladeshi Diaspora in the UK, who are conscious that climate change is a threat multiplier. Together, we drafted a letter to the Prime Minister of Bangladesh, Sheikh Hasina-Wazed, which was presented to her at the Scottish Parliament, to show our solidarity to the people of Bangladesh and demand that world leaders keep global temperature rise within 1.5 degrees Celsius above pre-industrial levels.

For all the gains that Bangladesh has made to become a middle-income country, global warming, rising sea levels, and the increased frequency and intensity of extreme weather events, such as floods and cyclones, puts all these hard-earned socio-economic advancements at risk.

Q: Why is climate change also a gender issue?

A: Climate change is a justice issue because the poorest countries and the most vulnerable people within them, especially those that depend on agriculture, are the most affected, despite having contributed the least to greenhouse gas emissions.

Climate change is a gender issue, because the majority of the world’s poor are women. Women produce 60-80% of food in lower income countries as smallholder farmers. Yet they do not have the same access to resources and land rights compared to men, which in turn reduces their yield and food security levels.

In Bangladesh, an estimated half a million people every year migrate from coastal and rural areas, due to climate and other factors, to overcrowded cities such as the capital, Dhaka. The majority of these migrant workers are men, leaving women behind to take care of the land, children and elderly family members.

In the face of recurring natural disasters, women in Bangladesh are 2-3 times more likely to drown from flooding than men, due to reasons such as being less likely to learn how to swim to the length of their sari preventing them from reaching safety. Post disaster, discriminatory gender norms have a tendency to be aggravated, which further violates women’s rights and dignity, leading to instances of human trafficking, child marriage, sexual exploitation and forced labour.

However, women can and do play a critical role in responding to climate change due to their local knowledge and leadership in sustainable resource management and practices at the household and community level.

I have been very fortunate to work and learn from organisations such as BRAC in Bangladesh, that recognise women and girls as agents of change, and put gender equality at the heart of their holistic development programming.

Q: How can diaspora organisations and leaders support climate action both in their new and old homelands?

A: Diaspora communities in the UK can support climate action, and the development of inclusive and sustainable policies and societies both here, and in our home countries, in a number of ways – including working together collectively, and sharing knowledge and experiences.

As consumers and voters, we can influence businesses and governments who have the power and tools to drive the systems change we need for deep decarbonisation.

Professionally, many of us work across a wide range of sectors, both public and private, as employees and entrepreneurs. We can implement or initiate environmental and equity, diversity and inclusion policies in our work places and throughout our supply chains.

Diaspora communities have a long history of giving back to their home countries, through remittances, investments and charitable donations. We can ensure these financial contributions are responsible and sustainable. For instance, one less obvious, yet highly impactful, solution to halting climate change is empowering women and girls. When funding a school or scholarship in our home countries, we should take gender equality into account.

Most importantly, Diaspora communities in the UK, can listen and learn from their local communities back home, who are already on the frontlines of the climate crisis. As countries in Europe, North America, and Australia increasingly face floods and wildfires, we can learn from countries like Bangladesh that have shown great adaptation and resilience in the face of climate impacts and irreversible loss and damage.

In order to create a world where no one is left behind, we need to ensure that a diversity of perspectives is represented at the various negotiating tables.

MORE ON THIS TOPIC| Gender and Beyond: unlocking the potential of data and an intersectional analysis of climate driven mobility.

Sara is a consultant paediatrician who completed her medical training in UK and currently works as a senior clinician in NHS. She obtained her fellowship in paediatrics and child health from Royal College of Paediatrics and Child Health in UK and achieved her master’s degree in Tropical Paediatrics and Child Health at Liverpool School of Tropical Medicine with distinction and prize. Her professional interest is linked to social justice in particular health service development in areas of quality, safety and safeguarding. During her training Sara worked with refugees’ children in the UK, street children in Brazil, FGM training in the UK and safeguarding in Sudan as part of voluntary campaigns. Sara is also former president of Sudan Doctors' Union UK.

"During COVID-19, the global pandemic, it was a triple fight: we had to face Covid at work, we had to save our families, and we had to support our colleagues and relatives back home in Africa."

Lena is an active member of the local and Syrian communities in Nottingham. She has organised many social and fund-raising events and has raised awareness about the Syrian conflict and the plight of the Syrian people. Lena has volunteered to help Syrian refugees when they first arrive to Nottingham. She is still active in giving help and support to the local Syrian community as and when needed. ‏As a founding member of Nottingham Women's Voices, Lena is also an active ambassador in the Trust Building Forum. She is part of the Difficult Conversation Project in Nottingham, which is funded by Nottingham City Council. She is a keen advocate for social justice, women's right issues and all that promotes community understanding and cohesion. Lena is also a member of the board of SCAN UK.

"When the war broke out in Syria, I started to volunteer and work with the Syrian refugees arriving in my city, Nottingham, helping them to settle in nicely and making them feel welcome and part of the community."

Kirstie is PhD candidate at SOAS, University of London in the Department of Development Studies. Her research interests include migration and development, African diaspora populations, second generation immigrant identity, and transnationalism. Prior to beginning her doctorate, she founded The Nana Project, a digital platform dedicated to preserving firsthand accounts of Ghana's history. Kirstie holds a Master’s degree in Intercultural Service, Leadership, and Management from SIT Graduate Institute and a Bachelor’s degree from Vanderbilt University in Human and Organizational Development. In 2016 she was named as one of Ghana’s Top 30 Under 30 by the Future of Ghana.

"Women have the skills, they have the drive that is needed to help create change and solve problems.  We need to ensure that women also have the opportunities and the support they need to use their skills to create change."