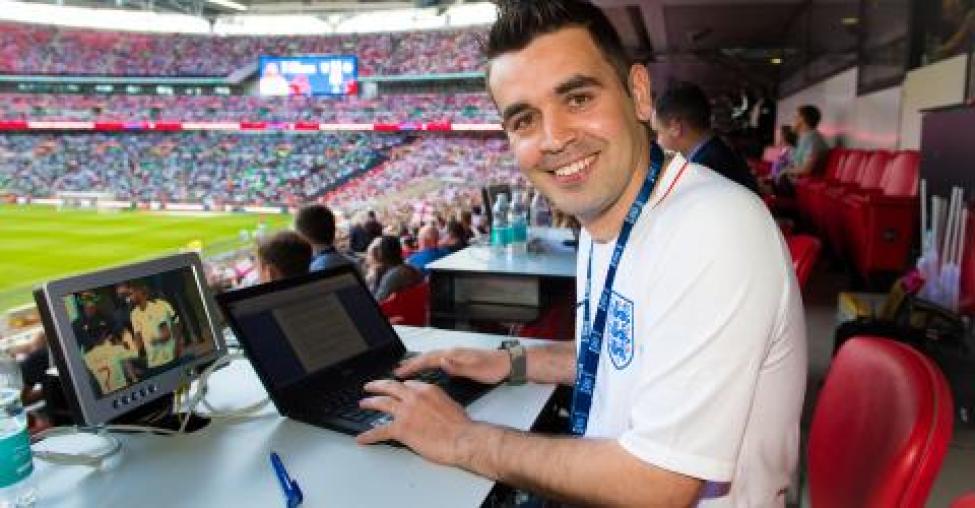 IOM, the UN Migration Agency, and England’s Football Association (FA) partnered in the initiative that invited and brought the Syrians to Wembley for the match which took place just two weeks before the FIFA World Cup kicks off in Russia.

Ahmad Al-Rashid, a 28-year old Syrian refugee living in London who is also an IOM staff member, was one of the Syrians in attendance at the England-Nigeria friendly.

“Football has always been a big part of my life – growing up in Syria, as a refugee in the region and now in the UK,” Ahmad said. “To me, it doesn’t matter where you are from. As long as there is a love of football, we will always have something to talk about.”

“Watching England play Nigeria at Wembley was like a dream come true.  This was my chance to show my support for the country that has welcomed me,” he added.

The IOM-FA collaboration was part of a developing partnership between the two organizations to make football more accessible to migrant and refugee communities by creating opportunities for greater community interactions through shared interests and a love of sport.

“The collective contribution of migrants and refugees to British society can only be realised through active inclusion,” said Dipti Pardeshi, IOM’s Chief of Mission for the United Kingdom.

“Football is a great unifying force because it crosses national, cultural and socio-economic lines.  Through the power of sport, we can counter migrant isolation and increase their opportunities to contribute to the community,” Pardeshi continued.

Through its digital platform i am a migrant, IOM recently launched the Together Through Sport campaign based on the premise that sport can be a powerful tool for facilitating integration and building links within communities, amongst players and their most devoted fans. The campaign seeks to highlight positive stories of sport, migration and integration like Ahmad’s via the i am a migrant site and on social media.  It also features a World Cup showcase that explores the link between migration and international professional football.

Over 8.8 million migrants and refugees live in the United Kingdom, according to IOM.

In the UK, there is a growing need for integration support due to expanded resettlement, increased migrant numbers, and reductions in support services aimed at fostering community cohesion.

IOM continues to support the British government’s commitment to resettle 20,000 people by 2020 through the Vulnerable Persons Resettlement Scheme (VPRS). To date, IOM has supported the resettlement of over 10,500 refugees under the VPRS.  In 2017 alone, a total of 6,212 people were resettled in the UK – a 19 per cent increase from 2016, according to Home Office numbers.

IOM also continues to work to advance the socioeconomic wellbeing and resiliency of migrants and refugees and UK society through a two-way integration process that promotes thriving, multicultural communities.

IOM’s activities in the UK provide resettled refugees with the building blocks to start their new life, including Syrian refugee integration projects like LINK IT, cultural orientation programmes, and Syrian information sessions that provide training to front-line support workers in the UK’s local authorities.

Read Ahmad’s story about how football has affected his life before and after becoming a refugee.