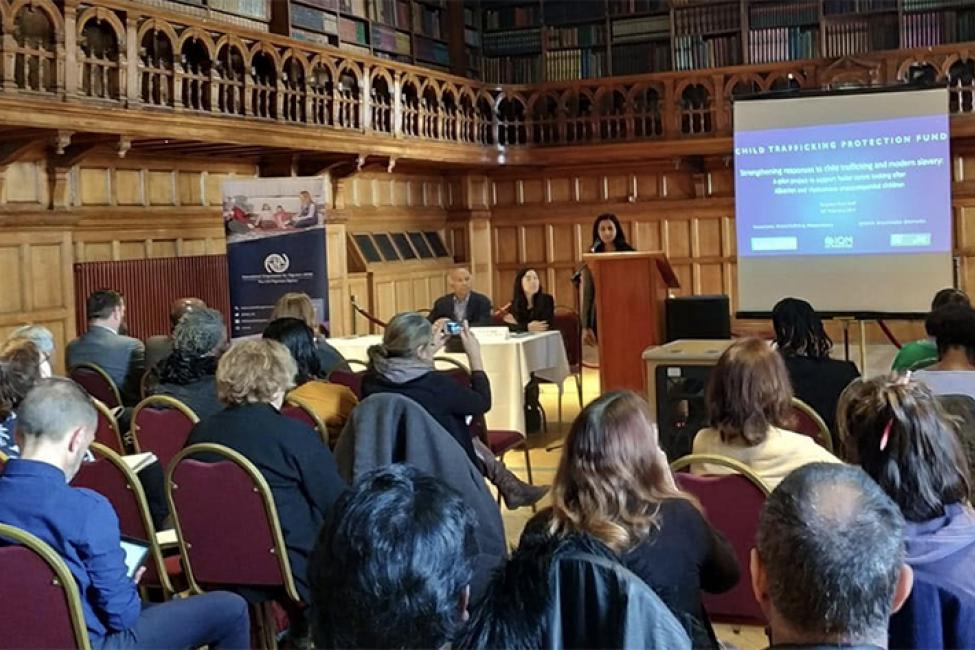 London – Unaccompanied asylum-seeking children are among the groups most vulnerable to trafficking and modern slavery. In the United Kingdom, 41 per cent of all referrals to the UK’s National Referral Mechanism (NRM) were individuals exploited as children according to the National Crime Agency.

“It is abhorrent and shocking that human trafficking and modern slavery continue to exist, touching every corner of the world.  Globally, one in four victims of modern slavery are children,” said Dipti Pardeshi, IOM UK Chief of Mission.

Albanian and Vietnamese children are two of the most common nationalities of asylum-seeking children at risk of trafficking here in the UK, explained Sarah Di Giglio IOM UK Senior Counter Trafficking Officer.

“Some have gone through traumatic experiences and many have difficulty building trust with unknown adults.  By providing information to foster carers to create an environment that is more understanding of their unique needs, these children may be at less risk of going missing, being trafficked or even re-trafficked,” Di Giglio continued.

In March 2017, the International Organization for Migration (IOM) launched the “Strengthening Responses to Child Trafficking and Modern Slavery” pilot project in the London Borough of Croydon, one of the UK’s local authorities looking after the highest number of unaccompanied children and those identified as potential victims of modern slavery. The project has supported foster carers in Croydon to reduce the risk of trafficking and modern slavery for these children.

“IOM is proud that more than 70 per cent of foster carers who attended our sessions in Croydon reported increased confidence in caring for these children.  The results can be replicated in other London Boroughs and throughout the country where around 4,000 unaccompanied asylum-seeking children are being supported, and they could be further adapted to address the needs of children of other nationalities,” added Pardeshi.

Under the pilot project, over 100 foster carers attended trainings and forums to increase their knowledge, confidence and capacity.  Together with Barnardo’s, one of the UK’s leading children’s charities, IOM also created culturally sensitive information materials in seven languages which were distributed to more than 260 unaccompanied children (as of December 2018) to improve their placement experience and reduce risks of re-trafficking. IOM is holding a project closing event today (26 February).

The project also provided online briefings for foster carers as well as creating a Foster Carer Handbook with information about trafficking and modern slavery, relevant administrative processes and information on Albanian and Vietnamese culture.  The project was funded by the UK’s Home Office Child Trafficking Protection Fund.

IOM UK also contributes to evidence-based research around trafficking from Albania, Nigeria and Viet Nam (findings expected end of March 2019) through the Home Office Modern Slavery Innovation Fund and has an ongoing regional EU-funded project supporting capacity-building of foster carers of unaccompanied migrant children in the UK and five other European countries.